Merry Christmas All! We have been truly blessed with all of the progress we have seen this year. In the last month alone, we have completed the Insulation, Drywall, Wiring, Power Hookup, Rock Facing, Siding, Doors hung, Well Drilled, and several other steps moving us closer to completely this 5 year long journey. Next steps include Painting, Trim, Flooring, and other finishing work.

This morning the well drillers came and drilled our well. See a video of that below. Next steps include Insulation and Drywall. Photos of that should be coming soon.

So many things have been going on over the last month. The plumbing and duct work has been mostly completed, Power has been run through most of the building, and we are now working on the internet and sound system wiring.

Framing has now been complete and the building has been wrapped in Tyvek Sheathing. This morning, the roofers began shingling. Below is a group of photos of the inside of the framed building and a time-lapse of the shingles starting to go up.

As of yesterday, the framing has begun on the building! The outside walls were mostly built through the day yesterday and this morning they were raised. The internal framing will continue throughout the week and the rafters are slated for early next week. Below is a timelapse of the 2 days and some pictures.

Over the past 2 days, 10 concrete trucks and about 20 hours of work went into pouring the main concrete pad as well as the entrances. (See time-lapse below) – Lord willing, the framers should begin in the next week or so.

After finishing the plumbing and insulation, we moved on to grading the stone and then laying plastic and metal griding to prepare for pouring the concrete. Most of the prep steps are complete an we should be pouring concrete in the next couple weeks.

The foundation is in and we are focused on completing the plumbing that will go under the concrete pad. Next Step will be to grade gravel over the the whole thing to prepare for pouring the concrete pad.

Despite another 6 inches of rain the night before, we were still able to get the block foundation for the main building built. Next Steps are to finish the blocks around the doors, setting up the plumbing that will go under the concrete, and pouring the main pad.

Despite a last minute Tropical Storm hitting the property, we were able to get the footers poured today. We showed up at the property around 6AM and needed to redig the footers because all the rain had caused them to collapse in. We then had to remove and replace the rebar. God truly blessed this because we were able to get all this work done and inspected by the time that the Concrete trucks showed up at 11AM.

We are now starting to see progress. The foundation was fully laid today and the rebar is set for the footers to be poured next week.

A little more work being done here today. Almost done with building up the ground and prepping for digging the footers this Saturday.

We are plugging on with the land development. A good portion of the new driveway has been dug out and we are building up the lower end of the property with dirt from the driveway and some fill dirt that was trucked in over the week.

Surveying has now been completed and we are working on the Land Development Steps. The retention pond has been dug, seeded and fenced in and is being scheduled for inspection. The next Land Development task is to flatten the area where the Parking Lot and Building will be. This will require several truck loads of Fill Dirt raise the low part of the property.

We have finished cutting down trees and all of the stumps have been removed. The next step is Land Development and we are starting with putting in the Retention Pond. The Surveyor is also scheduled to start next week.

Most of the Trees have been cut down and ground up over the course of several working days in the past 2 weeks.

Final Building Plans have been approved and we are cleared to start cutting down trees and beginning Land Development.

Land Development plans have been approved and we are awaiting Final Approval of Building Plans to begin construction.

We have officially begun a church building project.  We had our first dedication church service at the new property donated to us by BB&T Bank (Formerly Susquehanna Bank).  The property is located at 682 Gap Newport Pike (State Route 41) in Atglen, Pennsylvania.  The church service

opened with prayer, thanking the Lord for graciously giving us the property and asking his blessing on the property that it would be used for his glory and honor to reach the lost and be a tool He could use.  We asked the Lord that he would send revival to Chester County and we could see souls saved.  Pastor Keenan is praying for nine new families.

After prayer we sang some hymns including “To God Be The Glory.”  Pastor Keenan preached a short message from Nehemiah about using a few to rebuild the wall.  We are few but God can show himself mighty.

After the service everyone milled about the property and discussed about where we would like to build.  The kids really enjoyed the woods and having a place to roam.  The Lord has truly been good to us. 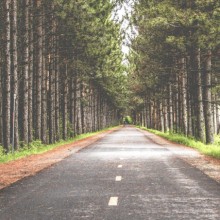